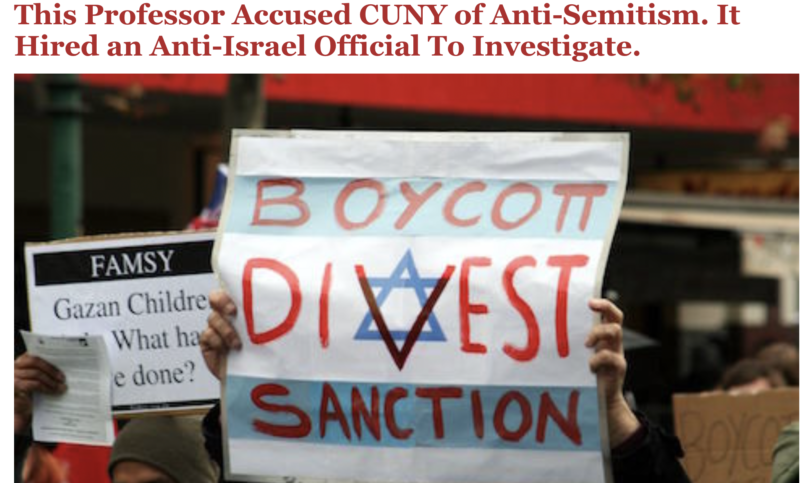 Is this some kind of cruel joke? You actually hire someone associated with an organization, #CAIR, that demonizes Israel and Jewish people to investigate the harassment of Jews and Zionists on CUNY campuses?
#ChancellorCUNY, @KathyHochul @NYCMayor @SenSchumer @RepJerryNadler ⬇️ https://t.co/WnlGpvV42G

CAIR  CUNY recently tasked the official with independently investigating a complaint of anti-Semitism made by a CUNY Kingsborough Community College professor. In response, anti-Muslim websites like The Daily Caller began publicly attacking her because of her Muslim identity and her civil rights work on behalf of American Muslims during her tenure with CAIR-Minnesota years ago. In a joint statement, CAIR and CAIR-NY said:

“Rep. Lee Zeldin’s decision to launch a vile, defamatory and Islamophobic attack against a Muslim woman because she once worked for our terror-linked organization is shameful. Mr. Zeldin, a poodle for Donald Trump with a history of smearing Muslim women, has reached a new low and sullied his office.

Rep. Lee Zeldin, Republican from New York, joined these attacks, falsely accusing the CUNY official and CAIR of being “pro-Hamas” and “antisemitic.”

CAIR gives us New Yorkers even more reasons to vote for Zelden for Governor:

Rep. Lee Zeldin (R-N.Y.) spent his first week at work since the government reopened harassing a Muslim colleague on Twitter with baseless suggestions that she hates Jewish people.

It started on Tuesday, when he found out he had been chosen as the ranking member of the House Foreign Affairs Subcommittee on Oversight and Investigations. Exciting! But he couldn’t fully rejoice in the honor of being the second-most-powerful member of a House subcommittee because he also learned that he would have to work on the panel alongside freshman Rep. Ilhan Omar (D-MN).

Was just selected as Ranking Member of the @HouseForeign Subcommittee on Oversight & Investigations! Just learned Freshman Rep. Ilhan Omar was also put on this committee w oversight of US foreign policy. Crazy to watch what House Dems are empowering/elevating.

The Hypocrisy Of Lee Zeldin’s Attack Against Ilhan Omar

Omar responded dismissively to his tweet, and Zeldin dug in. “Your anti-Semitic & anti-Israel hate is strong & wrong,” he posted on Twitter late Wednesday. The next day, he tweeted an audio recording of a voicemail in which a random unidentified caller said, “I wish Hitler would have done his fucking job.” Zeldin, who is Jewish, tagged her in the post and asked if she disagreed with the caller’s rant.

This new VM just came into my office. @IlhanMN, this is just another day in my world as an American Jew in Congress. Would love to know what part of this hate filled, anti-Semitic rant you disagree with? I disagree with all of it. Do you? pic.twitter.com/4WoJqiATCf