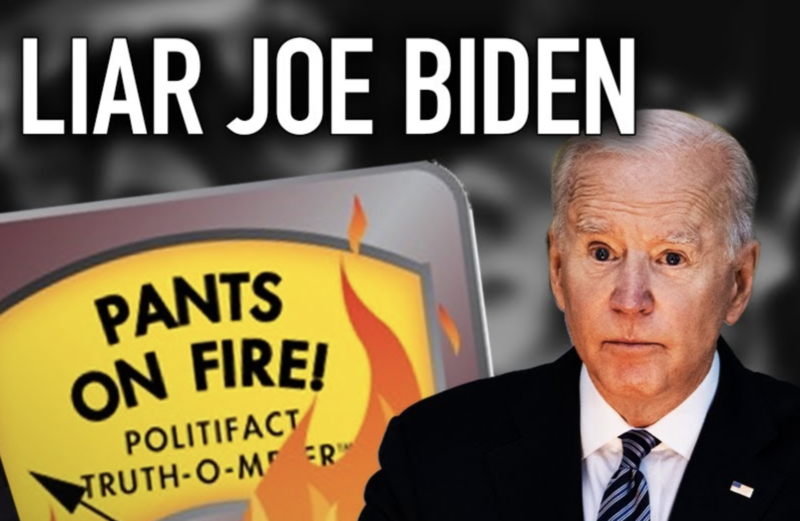 Independent Sentinel  CNN’s summary of some of Joe Biden’s lies:

Then there were these:

The Biden White House tweeted: “When President Biden took office, millions were unemployed and there was no vaccine available. CNN reported It’s just not true that “there was no vaccine available” at the time Biden took office. About 3.5 million people were fully vaccinated against Covid-19 and about 19 million people had received at least one vaccine dose as of Biden’s inauguration day on January 20, 2021, according to statistics published by the US Centers for Disease Control and Prevention. The US was already administering an average of more than 1 million doses a day at the time. The first doses administered outside trials were given on December 14, 2020, while President Donald Trump was still in office. And Biden himself received his second dose nine days before he was sworn in. As far as unemployment goes, Biden never acknowledges that the cause of  unemployment back then was the pandemic.

Biden said of the US population of undocumented immigrants: “The vast majority of the people, those 11 million undocumented, they’re not Hispanics; they’re people who came on a visa – who was able to buy a ticket to get in a plane and didn’t go home. They didn’t come across the Rio Grande swimming…” Biden was wrong to claim that the majority of undocumented immigrants in the US are not Hispanic. While it is obviously difficult to compile comprehensive statistics on this population group, the Migration Policy Institute think tank estimated in 2018 that 73% of undocumented people in the US speak Spanish at home and 68% are from the Mexico and Central America region, with an additional 7% from South America. The Pew Research Center has found that the Mexican share of the undocumented population has fallen over time, but that people from Latin America still made up 77% of the 2017 undocumented population.

Biden called for community college to be made free for all. He said this would cost $9 billion. Then he added: “We spend almost that money as a break for people who own racehorses.” There is no available evidence for the claim that the tax break for racehorse owners costs the government almost $9 billion or anywhere near that. The White House declined to provide a source for the figure.