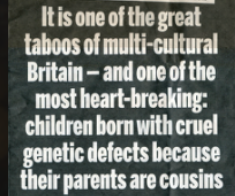 Up to 75% of Pakistani Muslims (the largest Muslim population in the UK) marry their first cousins, which means their offspring are ten times more likely to be mentally and/or physically challenged. All of which means British taxpayers are forced to pay for costly medical care for these people for the rest of their lives. A third of children who suffer from rare recessive disorders in the UK come from this community, which represents just 1.5% of the total population. In Bradford, where 75% of the Pakistani Muslim community marry a cousin, as many as 10 % of children suffer from genetic abnormalities.

Did you know that one in five child deaths in London is caused by rampant Muslim inbreeding and incest?

The Problem of Inbreeding in Islam

The Connection Between Muslim Inbreeding and Terrorism