A rarely spoken-about problem with Muslims is their inbreeding as a result of their long and deeply ingrained practice of marrying first cousins — a practice prohibited in the Judeo-Christian tradition since the days of Moses. With unbridled immigration into Europe and the West from Muslim countries, especially Pakistan, chronic inbreeding not only is a societal problem, it’s a drain on our medical and financial resources. 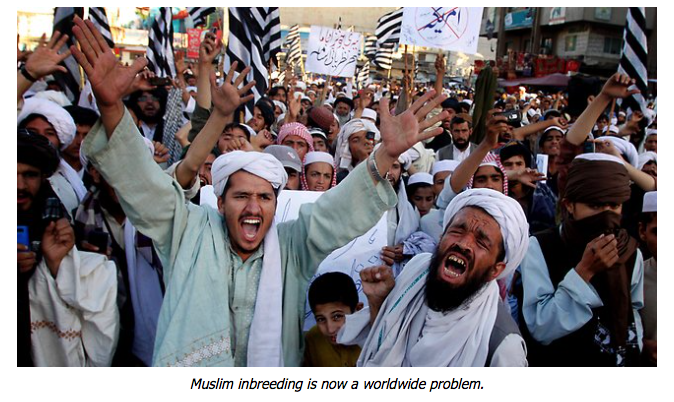 In a report by Nicolai Sennels, published on PJ Media, massive inbreeding among Muslims has been going on since their prophet allowed first-cousin marriages more than 50 generations (1,400 years) ago. For many Muslims, therefore, intermarriage is regarded as being part of their religion. In many Muslim communities, it is a source of social status to marry one’s daughter or son to his or her cousin.

70 percent of all Pakistanis are inbred. A rough estimate reveals that close to half of everybody living in the Arab world is inbred. A large percentage of the parents that are blood related come from families where intermarriage has been a tradition for generations.

Medical evidence shows that the probability of depression is higher in communities where consanguine marriages are also high. The closer the blood relative, the higher the risk of mental and physical retardation and schizophrenic illness, as well as recessive genetic disorders.

The below videos are a few examples of the mental defects inbreeding causes.

And then there are the findings on intelligence. Research shows that if one’s parents are cousins, intelligence goes down 10-16 IQ points. The risk of having an IQ lower than 70 (criterion for being “retarded”) increases 400 percent among children from cousin marriages.

It is estimated that one third of all handicapped people in Copenhagen have a foreign background. Sixty four percent of school children in Denmark with Arabic parents are illiterate after 10 years in the Danish school system. The same study concludes that in reading ability, mathematics, and science, the pattern is the same: “The bilingual (largely Muslim) immigrants’ skills are exceedingly poor compared to their Danish
classmates.”

These problems within Islam bring many detriments to Western countries. Expenses related to mentally and physically handicapped Muslim immigrants, for instance, severely drain the budgets and resources of our societies.

Look at Denmark, for example: one-third of the budget for the country’s schools is spent on children with special needs. Muslim children are grossly over represented among these children. More than half of all children in schools for children with mental and physical handicaps in Copenhagen are foreigners — of whom Muslims are by far the largest group

One study concludes that “foreigners inbreeding costs our municipalities millions” because of the many handicapped children and adults.

Did you ever wonder how much Muslim inbreeding (first-cousin marriages) is costing Western healthcare services?

Did you know that one in five child deaths in London is caused by rampant Muslim inbreeding and incest?

The Problem of Inbreeding in Islam

The Connection Between Muslim Inbreeding and Terrorism

Want to see one of the results of rampant Muslim inbreeding?