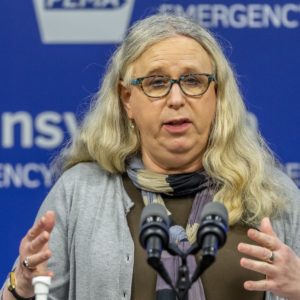 Showing extreme disrespect for the Senator, Dr. Rachel Levine (photo right) obfuscates around Rand Paul’s legitimate questions concerning giving childen dangerous drugs and hormones that will stop them from going through puberty to make it easier for them to change genders while they are still children. Paul mentions the case of an 11 year-old girl who had her gender changed, and then regretted it. FYI: Senator Rand Paul is also a physician.

AND THEN THERE’S THIS:

Stevens was placed on suspension from his field teaching programs after his peers uncovered videos of him discussing conservative dogma.

The university claims that Stevens’ videos “call into question” his ability to “maintain a classroom environment protecting the mental and emotional well-being of all of [his] students.”

Stevens told The Daily Wire he refuses to take part in “re-education”training.

The Dean also insinuated that future teachers are required to support all aspects of homosexuality and gender identity.